Home USA US Law Constitution Lawlessness! What Next?

Obama’s Executive Order (EO) aimed at encouraging more illegal Third World immigration signaled his determination both to dispatch the Constitution to history and face down all opposition. Barring an effective response from the Right, the way is open for him to impose the whole revolutionary agenda on America by decree within the next two years. He has made clear that the House and Senate Republican Party and the conservative citizens of America will not be allowed to stand in his way.

We have never considered him to be an educated man or one remotely fitted to be the President of the USA but we have never failed to observe his arrogance, his conceit, his ability to lie, his smartness, his ruthlessness and his commitment to the revolutionary agenda of his masters and their allies. In short, we have never under-estimated him or the forces he serves. He and his masters have many advantages in the final struggle which is now emerging.

In our last article we called upon the Republicans to walk out of Congress and go back to their constituencies, campaign to arouse public awareness and opposition, take that campaign on to the streets and turn the Louisiana election into a referendum on illegal immigration and illegal government. A website visitor spoke for many on the Right when he emailed that Obama can now only be stopped by our side taking to the streets. As he pointed out the Left have been taking to America’s streets for decades with great success, but since the Second World War the Right has surrendered all public spaces to them. And surrender it has been!

On this website we believe that nothing but massive street protests by the forces of the Right can now halt and reverse Obama’s Leftist advance, for only such demonstrations will awaken those Americans who Rush Limbaugh calls “low information voters”. The time has passed when political opposition could be effectively expressed through the ballot box and the Nation’s legislatures – in short through Constitutional, traditional and respectful actions. As we keep warning on this website, America is no longer experiencing ‘politics as usual’, ‘politics by the old rules’. If the Right continues to fight by those old rules, it faces imminent and crushing defeat. We do not expect the Republican leadership to willingly take the struggle to the streets and next we will explain why, but it is up to the conservative rank-and–file to find fearless new leaders who will take the fight there and force the Republican legislators to march with them or become irrelevant.

It was predictable that Washington’s Republican legislators would not let a Constitutional crisis interfere with trips home for Thanksgiving. We may speculate that the Obama plotters deliberately chose their timing for the EO fully aware that for those who prefer ‘politics as usual’ nothing but a major terrorist attack on American soil would change plans for a vacation. Revolutionaries do not take time off for holidays unless they are dictating events. When their revolution is remotely threatened, they are ready to respond, to be outraged and to be offensive. Conservative people, by their very nature, are different. Below we set out why they are different and what are the obstacles to our side abandoning ‘politics as usual’ and taking to the streets.

Revolutionaries, indeed Leftists of all persuasions, are mostly angry people. Many are economically unsuccessful, unless in government employment or on government welfare. Those who are successful, such as tech billionaires and Hollywood’s wealthy are nearly always dysfunctional people who are unhappy despite riches and seeking to remake society in their own perverted images. They have no Faith and no moral compass and they are driven to impose revolutionary change on the world or to finance such change. Few commit to family life and children. It is unlikely that many on the activist Left genuinely celebrate Thanksgiving. More likely, in private, most sneer at and despise the Pilgrim Fathers, as they do every Christian American tradition.

Since the Republican politicians have failed to recognize that we are experiencing a revolution imposed by a new revolutionary (Media) Class (and hence it is no longer ‘politics as usual’), and since they are people who quite naturally, habitually and with little thought, celebrate Thanksgiving, we should not be too judgmental that they now head for home, family, Church services and turkey. Conservatives –even RINO’s – are creatures of habit and family commitments (yes, even conservative adulterers) and rarely as committed to the political life as are Leftist agitators, social misfits and revolutionaries. Nor, in general, are they as happy to lie and conceal their political and economic aims. Socialists, without hesitation conceal their ultimate goals all the time and feel moral about ‘ends justifying means’.

The weaknesses we have attributed to Republican politicians are also the weaknesses of the conservative rank-and-file. Perhaps only military patriots of the Right are above such criticism for they put duty to Country first. True the rank-and-file have not been corrupted and made soft by life in Washington DC or the State Capital, but there are reasons why the Right has not taken to the streets for decades. They can be summarized as

This last one is crucial. Conservatives and Christians have on occasion taken to the streets. In San Francisco there is an annual ‘March for Life’ and tens of thousands of Christians and conservatives take part. The MSM, in lockstep, looks the other way and so the march is like a tree falling in the forest. This is demoralizing for those who march but it also prevents copy-cat events. Such MSM treatment can be contrasted with the current Ferguson protests and the attention once given to Cindy Sheehan and her lesbians for peace. Furthermore, the MSM gives cover (and positive publicity) to violent Leftist protestors, never revealing identities and occupations (or lack of them!). In contrast the MSM seeks to identify conservative protestors, thus inviting workplace recrimination and many types of intimidation in private life.

If all the personal characteristics of those on the Right were not enough of a deterrent to street activism, there are geographical and demographic handicaps. The rapid growth of big cities, populated only by the very (liberal) rich and the lumpen proletariat, have been a gift to the Left. History provided some telling examples of what was to come. The French Revolution was achieved solely by the resident Paris mob. Lenin’s small but disciplined Bolshevik Party needed only to occupy Moscow and St. Petersburg in order to impose totalitarianism on hundreds of millions of the unsuspecting of the Empire.

Here in the USA, the hardworking, those with families, the small business people, the homeowners, Whites and Asians – in short those with an investment in America – have moved to the suburbs to commute or are in small towns or the countryside. Demonstrating, just once, in big cities requires a huge commitment. This is in stark contrast to the ‘Occupy’ movement, Ferguson’s rioting looters or the organized protest marches and riots of Public Service Unions in Madison in the campaign against the Republican governor.

This has not been written to discourage a sustained Nation-wide conservative peoples’ demonstration but to warn of the obstacles that must be overcome by any ‘firebrand’ and inspiring leader, who will be ruthlessly attacked by the MSM and the forces of government. Yet surely Obama’s latest illegal EO has aroused much rage and anxiety and now the time has come for action.

Extreme cold weather sits over most of the USA and seasonal wet and windy weather strikes the UK. No warming experienced! 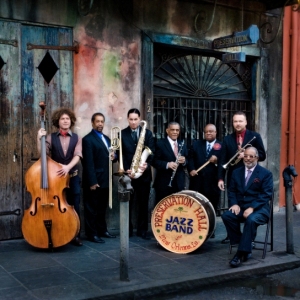 Last week I was fortunate to see and hear the Preservation Hall Jazz Band, a New Orleans band that tours America to packed concert halls. Although the band’s music is rooted in the wonderful old music of the French Quarter and has all its accessibility, tunefulness, soul and rhythm, PHJB’s musicians (all N.O. natives) are master players and incorporate many styles. Trumpeter Mark Braud at times could be mistaken for Freddy Hubbard or Clifford Brown, and tenor saxophonists Charlie Gabriel (an astonishing aged 81) and Clint Maegden are in the Stanley Turrentine class. Add in pianist/Hammond Organist Rickie Monie, Freddy Lonzo (trombone), drummer Joe Lasti Jnr and Ben Jaffe on double bass and this is one hugely talented band. Braud and Maegden are also impressive singers. This is happy, grown-up, foot-tapping music and not a strummer in sight! If this band comes your way, do not miss it!