The Republicans will not win a clear-cut majority in the Senate tomorrow. That is our prediction. It will be a close result and not decisive. The power of the Ruling Media Class and the strength on the ground of its allies are, combined, too much for a divided Right to reverse the Revolution’s consolidation. The Revolutionary Left is not divided. Its troops are disciplined, its leadership long purged of mavericks, and its rank-and-file, tribalized, easily manipulated and in some cases intimidated. The opposite is true of a fractious Right which is dominated by individualists, independent thinkers, other-worldly Christians and a considerable number of self-centered, greedy opportunists easily corrupted by life lived around the honey-pot of government.

A Ruling Class inevitably has great advantages – wealth, fame, celebrity, rewards to offer, punishments to mete out and corruption. No Ruling Class in history has been wealthier than that of today’s America. Not only Hollywood’s billionaire Directors and Producers have become fabulously rich. Beverly Hills has experienced ‘trickle-down’ wealth (more accurately described as ‘gushing down’ wealth) for actors, fashionistas, publicity and public relations insiders, lawyers, entertainers, Sportsmen and property developers. This gang of get-rich-quick fun lovers in LA has now been joined by the unbelievably rich geeks of Silicon Valley. It was probably inevitable that these drab billionaire ‘techies’ would identify with the oddities and emotional cripples, a mere 400 miles down the road. It would take another article to explain the attractions that a glamorous, rich and dissolute Ruling Class must have for the backroom innovators of Sunnyvale, San Jose and Santa Clara. Anyway, the depressing consequence is that Silicon Valley wealth and the control of Internet News is now allied to those Rulers who have no allegiance to America and who resent its Christian morality.

As if all this wealth and influence were not enough, the Ruling Class can depend on the polling booth support of all of America’s African tribe, the recent ungrateful arrivals from India, China and the Third World, secularized Jews (embedded in the Media and Wall Street), the majority of Latinos and the vast army of unionized public service workers. This last group, an army that has grown exponentially under both Republican and Democrat regimes, is especially effective for it is concentrated in urban areas all across the country. Not only is it the only truly organized mass organization- apart from the Armed Forces- but it operates the government machinery and includes those who indoctrinate the young with loathing for their Nation. To pile advantage on advantage, and add salt to the wounds of America’s real workers, these ‘public servants’ have endless vacation time to carry out political activism funded by the taxpayers.

The nearest the Right has to a national organization that is as focused and effective is the ‘little peoples’ NRA but this is not nearly enough to compensate for Leftist voter fraud. To understand why voter fraud is a tool of the Left it is necessary to remember that for their activists ‘ends justify means’. Actual voter fraud is a Leftist monopoly largely confined to the inner cities and racial ghettos where the rule of law cannot run. There is probably no voter fraud in affluent Democrat- dominated suburbs, for the inhabitants, like those in conservative areas, have too much to lose or are by nature law-abiding. In any case, voting in socially and racially mixed suburbs can easily be monitored. In the ghettos, things are entirely different, especially in the Black ghettos. Here crime is an accepted way of life, only one party is tolerated and ‘respectable’ allies in government and politics actively collude. The Black ghetto reaction to the recent cases of Trayvon Martin and Michael Brown provide ample evidence that criminality is viewed there as more than acceptable. If voter fraud was not profitable for the Left there would not be such powerful and effective opposition to regulations that could restore integrity to the election process. There is hardly a Leftist, from the ghetto to the Supreme Court, who will not go through intellectual contortions to resist reform and ensure the continuation of voter fraud.

Let us face the unpleasant facts. The Ruling Media Class, with its control over news and entertainment, its Public Service allies with their control over the education of the young and the levers of government, and the rewards of welfare for expanding racial minorities, have the upper hand. The Right has no rewards to offer, only hard work and distant goals. We believe the 2012 election was stolen where it counted, despite the growing unpopularity of the Obama regime and the obvious superiority of Romney. Ongoing control of the Senate is very important to our Ruling Class so that Obama can complete the moral and political revolution without hindrance. All means necessary, and all the resources of a Ruling Class and its government will be employed to retain that control.

It is a tribute to the MSM’s power over news, and the Ruling Class’ ability to corrupt Washington politicians, that the Republican Party is not sweeping the Democrats from office all across America. Despite 6 years of a Presidency that has combined gross ineptness with Revolutionary ideological extremism, too many of the people who are victims remain disengaged from the political process. This website recognizes that the Republican leadership is timid, compromised and petty and not at all what the Nation’s good people need. But the Democrat Party is the public face and the legislative weapon of forces that are hell-bent on destroying the old America and its people and replacing them with a totalitarian America and a Third World population ruled over by a degenerate Ruling Class. If the Republicans can salvage a narrow victory tomorrow, valuable time will have been won.

In the UK there are reports on the BNP website that poppy sellers have been brutally attacked on the streets. Every November, imitation poppies are sold on the streets before Remembrance Day (the equivalent of Memorial Day in the USA). The aim is to raise money for wounded Servicemen. In the distant past- before racial and cultural diversity enriched the UK- ‘Poppy Day’ was a non-controversial event that enjoyed the widespread support of a homogeneous population. Those days are gone forever and the current attacks are the latest evidence that the UK has undergone a revolution.

The BNP reports that a 15 year old army cadet poppy-seller has been attacked with lighter-fuel on a Manchester street and has sustained serious facial burns. A few days earlier an elderly poppy-seller was also violently attacked. It seems likely that both attacks (and probably news of other attacks has been suppressed by the MSM) are the work of Islamic Imperialists. No-one who visits the BNP website should be surprised for a British soldier was recently beheaded on a daytime street and Islamist attacks on native citizens are commonplace in city areas that have benefitted from Muslim ‘enrichment’. This is the UK governed by Dave ‘Hug-a-hoodie’ Cameron, his Tories and their LibDem allies. In the wings, waiting to take over are the Miliband Socialists and to their Left the Greens. All are united in their hatred of the BNP and other Nationalist fringe groups and all are eager to use the full force of a politicized police and judiciary to ‘smash’ the BNP and similar groups. What has this to do with the US elections tomorrow?

Well, no two countries have identical political landscapes but the UK has had an eruption from the grassroots Right in the form of UKIP, a ragbag of a Party that has been challenging the mainstream gang with some success. UKIP cannot be compared to America’s Tea Party but any sane Brit, at this disastrous time in the UK’s history, should vote for UKIP and join the BNP or another Nationalist Party. None are perfect but beggars can’t be choosers. In the USA, at this disastrous time, any sane American should vote for the official Republican and join the Tea Party.

Much of the UK is enjoying a mild and damp Autumn, which is unremarkable. Here in the US, the sustained absence of hurricanes (hurricanes have long been portrayed as evidence of global warming) has gone unreported in the MSM. Meanwhile record cold weather has enveloped the South East Coast all the way down to Florida. Here in middle California some good rain fell on the fruit-growing coast but failed to penetrate inland. No rain is forecast for the next 10 days and November is thus passing and the drought intensifying. Things are getting very serious but it is hard to link this to global warming. 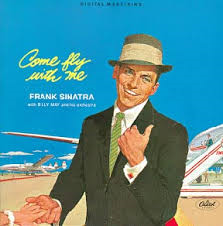 If the Democrats retain control of the Senate it might be time for we counter-revolutionaries to fly away before Obama announces the total suppression of free speech, and the Justice Department begins tracking us down. Frank Sinatra’s “Come Fly With Me” seems appropriate. This great Sammy Cahn / Jimmy Van Heusen masterpiece was a Sinatra favorite and he recorded it many times. In remembrance of a time when music was performed by adults and America was more racially integrated (pre-Obama/Holder) try the track from ‘In Concert. Sinatra at the Sands with Count Basie and the Orchestra’.