Not so long ago, the idea of yet another Bush in the White House would have been dismissed as comic. Jeb’s family predecessors, George One and George Two hardly left office covered in glory and each bequeathed an 8 year Democrat President to the Nation. Now, we are told by the Media, Jeb is the 2016 favorite of mainstream Republicans. This takes some believing, but ever since Gerald Ford and then John McCain carried the Republican banner, any disastrous pick is possible.

Jeb Bush’s campaign in the primaries will be well-financed for we can be sure that that section of Big Business that leans Right purely on economic matters will favor him. Unfortunately a desire for balanced budgets is not necessarily accompanied by a love of country, an attachment to tradition, the wisdom that supports real marriage and whole families, support for free speech and gun rights, and affection for the Constitution. In short, balanced budgets have only a weak link to the conservative values that make and protect a Nation. Right-leaning Big Business supports politics shorn of morality and a long-term historical perspective.

Jeb Bush, like his brother and father, may be a decent and honest man, unlike the present White House occupant, but he has none of the qualities that are required of a President who will face the task of rolling back 8 years and more of a Revolutionary regime. Indeed, nothing he says reveals any passion about the destruction of American values that Obama and his comrades have wrought. We should be grateful for Bush’s honesty for he makes no secret of his support for amnesty, his willingness to work with Revolutionaries and his distaste for the grass-roots portion of the Republican Party. Bush is a proud RINO who values the goodwill of those voters who have no goodwill towards America and its exceptional past.

Bush supporters make much of his record as a popular Governor of Florida but nothing he did rolled back the Leftist advance. He merely interrupted it- no small achievement at the time but wholly inadequate for present day America. Since then the grass roots of the Republican Party, in response to a Ruling Class that is marching towards a corrupt totalitarian Socialism, has emerged to resist it. Jeb Bush, even more like his accommodating father than his brother, has chosen to represent the enemies of resistance. He is, in short, a collaborator, for he is comfortable with the Left’s gains and openly hostile to any fight-back by the Right. In the White House, Jeb Bush as a tool of Big Business would be a friend of the crony capitalism that has no moral basis (and could be termed Fascism stripped of Nationalism) and he would quickly evolve (Obama style) on all the moral issues that are so important to the Ruling Media Class.

The Republican Party, although seriously infected with the amoral benefactors of crony capitalism, is not lacking in conservatism at the grass-roots and has a number of good people among legislators. Scott Walker, the governor of Wisconsin, has an awesome record dwarfing that of Jeb Bush. Walker captured the Governor’s office in a State that had been dominated by Democrats. He then took on Wisconsin’s powerful Public Service Unions, stripping out their privileges and restoring freedom of choice to workers. He refused to be intimidated by Red Mobs on the streets and successfully fought legal battles a recall election and this last State election. He has led the Republican Party to victory in the legislatures and never wavered in his commitment to conservative and Christian values. He has never wilted under constant MSM attack. In short, he has been tested under fire and is battle-hardened. Moreover he is not the next-in-line of a dynasty that enjoys the company of Big Business and feel entitled to power.

The Republican Party has many other successful governors who in varying degrees have faced down the Left and the Media Class and who stand for the basics of conservatism—gun ownership, free speech, real marriage, limited abortion, small government, safe National boundaries, honest elections and full adherence to the Constitution. It also has Ted Cruz, Mike Lee, Jeff Sessions and many more moral legislators whose testimonials include the unrelenting hatred of the Media Class and the Left.

Jeb Bush is not the favored candidate of the Media Class and its Leftist allies. So far, that is Squaw Elizabeth Warren But he is their fail-safe candidate. If he can be foisted on the Republican Party he will likely lead it to defeat, having jettisoned the White conservative rank-and-file. If, by chance, he wins, he will be accommodating.

Among those who will be happy to see Jeb Bush anointed is Jennifer Rubin. The MSM has been successful in passing off Rubin as a member of the ‘Hard Right’ and as such she gets invited on to conservative Talk Shows and writes a column for the Washington Post. There she can sow division within the Republican Party and undermine all those who raise the flag of moral conservatism. Rubin, who has been described glowingly as “One of America’s 50 most influential Jews”, enjoyed easy entry into influential jobs and spent 20 years working for Hollywood studios, a sure sign that she is a member of the Media Class. Although Rubin is a staunch advocate of American support for Israel, another sure sign that she is a member of the Media Class is her equally staunch support for same-sex marriage and the homosexual agenda. Her task is to foist this agenda on the Republican Party. It is in this context that her most recent article in the Washington Post can be understood. It is a furious and unprincipled attack on Ted Cruz and another reason why conservatives should rally to his cause.

A recent opinion poll revealed that race relations are significantly worse now than when Obama entered the White House. This should surprise no-one, though it is not that he has failed. He has succeeded. Although the racial chip that he carries on his shoulders has played its part in widening the gulf between Blacks and all others, it is a basic tool of revolutionary Socialism to divide a Nation that has been selected for take-over.

Obama’s sudden announcement of a rapprochement with Cuba has led conservative commentators and others to scramble for an explanation. Some have come up with very complex motives and they may be right but more likely the reasons are simply explained. He has pleased the Democrat Party’s Far Left base. Cuba is the blue-print for a revolutionized Socialist America and Castro has always been a folk hero of the Left. The Left loves gestures and symbolic actions which this is and it makes them feel good. Beyond that there is Obama’s own personality. He is, barring a change of the rules, in the second and last term of his Presidency. In his first term he had to keep his eyes on a second term and this restricted his actions. Often he had to adopt a low profile so as not to be associated with the unpopularity and the emerging failures of his policies. He went golfing or simply disappeared.

He no longer needs to be restricted by a future campaign and in any case has over time expanded his personal power. He is enjoying flaunting the privileges of office and can now enjoy flaunting the power of office. Whilst the Cuba announcement may serve the purpose of distracting public attention from other things, it is more likely that he feels the need to have Media attention and assert his power simultaneously. How it must please this grand psychopath to relax on the golf course surrounded by fawning buddies from the pro-Sports world one day and the next day emerge to astonish the world with his power and his choice of actions. Expect many more such announcements that underline his freedom from the restraints of Congress in these last two years.

Here is some good news! Martha McSally, a retired Air Force colonel and conservative Republican has emerged from a recount to take a former Democrat House seat in Arizona. Initially McSally had a majority of 161 and her opponent demanded a recount. Republicans –especially conservative Republicans- rarely survive recounts, but this time the recount increased her majority by 8 votes and her opponent has conceded. McSally will proceed to Washington where we hope she will resist corruption and not be blackmailed into evolving. We call her a conservative because she campaigned for gun rights against the anti gun rights Barber. Barber was the choice of the Democrat Gabby Gifford and her husband Mark Kelly. Gifford who was seriously wounded by a deranged Democrat supporter occupied a safe Democrat seat until her injuries and Barber replaced her. Gifford and Kelly have been in the forefront of the billionaire Bloomberg-financed campaign to disarm Americans. In the previous election Col. McSally was narrowly defeated. This victory was no mean achievement given Gifford’s unfortunate fate, though a Republican judge actually died from the attack. Gifford and Kelly’s feelings about guns can be understood but gun ownership is a right that Americans must not lose for it is an obstacle to the imposition of Socialism and the best deterrent against redistribution by the criminal underclass. McSally can also be expected to stand up for a strong and patriotic military.

Finally, Republican legislators in the next Congress should ask for a full release of the enquiry report into the desertion of Bowe Bergdahl.

Bright cold weather dominating in the UK and more rain and cool weather reviving California! Nothing to see here so move on! 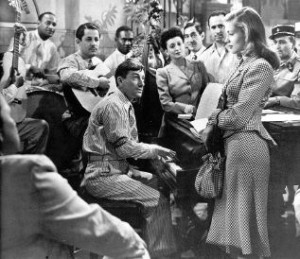 Ray Charles was a very good jazz musician and more than capable on saxophone and piano before he found fame as a singer with a Gospel style. His vocal recordings were imbued with conviction. Pianist Hoagy Carmichael (1899-1981 and a rare conservative Republican in the entertainment world) wrote many outstanding melodies including Stardust, Nearness of You, Heart and Soul, Rockin’ Chair, ‘I Get Along Without You Very Well’ and ‘My Resistance is Low’. All are long forgotten now that infantile lyrics, shock and noise dominate the music world. Carmichael also wrote the melody of ‘Georgia On My Mind’ back around 1929. The ambivalent lyrics were written by Stuart Gorrell.

In 1960, just before any semblance of decent popular music was banished by the Media Class, Ray Charles recorded ‘Georgia On My Mind’ and gave it the Gospel treatment. It is one of the great popular recordings of all time and we dedicate it to a true conservative patriot who lives in Atlanta, Georgia. May he and his wife enjoy a happy Christmas and a successful 2015!